A leafless Foothill Palo Verde tree (Cercidium microphyllum) catches the last light of the day as sunset approaches in Saguaro National Park outside Tucson, Arizona. The Foothill Palo Verde is one of the most widespread trees of the Sonoran Desert and, although they may live for several hundred years, they are exceedingly slow-growing and typically only reach a height of 10-15 feet (rarely 25-30 feet have been reported). These trees have a very deep root system and are “branch deciduous” with a tendency to have basal branches die-off during periods of severe drought – thus becoming a smaller tree. This specimen appears dead, having lost its typical small leaves and its green chlorophyll containing bark which can support photosynthesis when the tree has shed its leaves during excessively dry periods. Despite these adaptations for survival in the adult tree, the seedlings are susceptible to desiccation during the first few months of their lives with only 1.6% of seedlings surviving.

This image was taken just before sunset in the Rincon Mountain District of Saguaro National Park immediately adjacent to the narrow, paved, one-way Cactus Forest Drive - a portion of which can be seen in the lower right corner of the photograph. In the foreground are Prickly Pear Cactus (Opuntia engelmannii). It had been an unusual cloudy day until just shortly before sunset when the clouds began to dissipate and the sun dropped below the edge of the storm front – bathing the entire landscape in golden light. The best light lasted literally for less than a minute and I was only able to capture one frame of this scene before the intensity of the spectacle was lost. 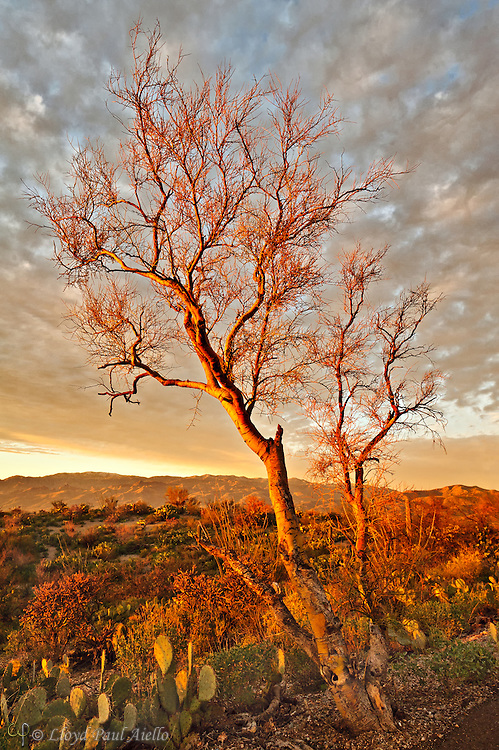