A mini Cattleya Laleliocattleya hybrid orchid bloomed by the photographer. Cattleya is a genus of 113 species of orchids found from Costa Rica to tropical South America, growing throughout the Amazon region and to the south of Brazil.. The cattleya is an epiphyte (air plant), which stores water in expanded stems called pseudobulbs.

The genus was named in 1824 by John Lindley after Sir William Cattley who was the first to bloom a specimen of Cattleya labiata. William Swainson had discovered the new plant in Pernambuco, Brazil, in 1817 and shipped it to the Glasgow Botanic Gardens for identification. Later, Swainson requested that a few plants be sent to Cattley who was able to bloom one a full year before the plants in Glasgow. It would be another 70 years before a Cattleya would be rediscovered in the wild because of a mixup in the assumed location of the plants.

Cattleya are widely known for their large, showy flowers. The flowers of the hybrids can vary in size from 2 - 6 inches (5 -15 cm). They occur in all colors except true blue and black. Cattleya have been hybridized for more than a century. Beeding Cattleya with Laelia produces Laleliocattleya and results in a more elongated closed "cone" that gracefully opens into the full lip of the blossom. Laelia also contributes to the intense violet shade. 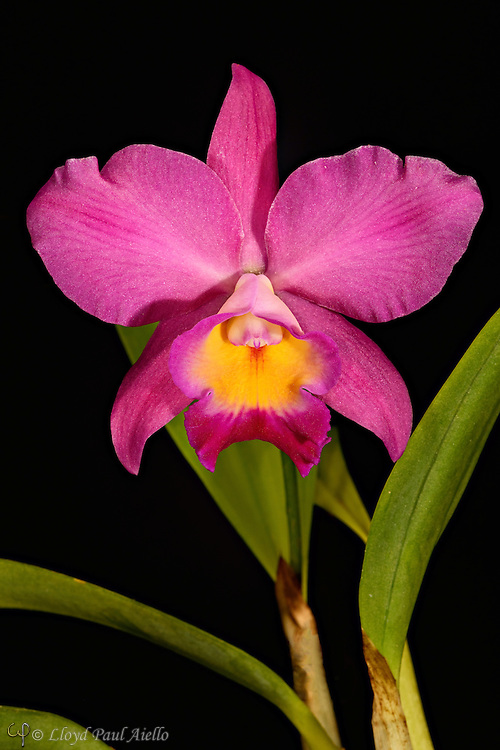