The Southern Cassowary (Casuarius casuarius) is found in the tropical rainforests of Indonesia, New Guinea and northeastern Australia, preferring elevations below 1,100 m (3,600 ft) in Australia and below 500 m (1,600 ft) in New Guinea. Also known as the Double-wattled Cassowary, Australian Cassowary or Two-wattled Cassowary, it is a large flightless black bird related to the emu, ostrich, rhea and its closest relative, the Kiwi, from which it diverged approximately 40 million years ago.

The Southern Cassowary is the largest member of the cassowary family and is the second heaviest bird on earth, attaining a maximum estimated weight of 85 kg (187 lb) and height of 190 cm (6 ft 3 in). It is currently the largest living Asian and Australian bird.

Females as shown here are larger and more brightly colored than the males. A horn-like brown casque, measuring up to 16.9 cm (6.7 in) high, sits atop the head. The bill can be up to 19 cm (7.5 in) long. The three-toed feet are powerful and equipped with a lethal dagger-like claw up to 12 cm (4.7 in) on the inner toe. The blade-like claws are capable of killing humans and dogs if the bird is provoked.

The Southern Cassowary forages on the forest floor for fallen fruit and can digest fruits toxic to other animals. It also eats fungi, insects and small vertebrates.

The Southern Cassowary is a solitary bird, which pairs only in breeding season, in late winter or spring. Cassowaries make a booming call during mating season and hissing and rumbling sounds otherwise. The male builds a nest on the ground made of plant material 5-10 cm (2–4 in) thick and up to 100 cm (39 in) wide. The male incubates the eggs and raises the chicks alone. A clutch of three or four eggs are laid measuring 138 by 95 mm (5.4 in × 3.7 in). They have a granulated surface and are initially bright pea-green in color although they fade with age. 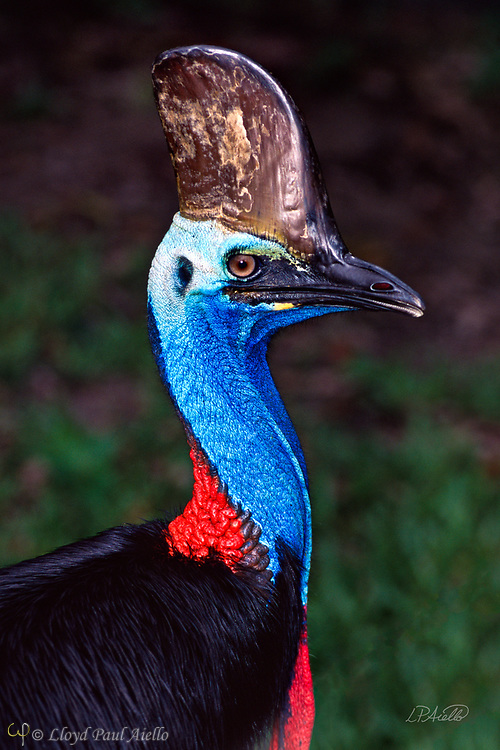