Orion and Pleadeis over Death Valley

In the winter at Death Valley, the clear skies, cold nights and lack of nearby lights create one of the best viewing environments for the night sky. Seen here in March, the many colors of the stars are clearly visible. Centered in the image is the constellation Orion, with Orion’s Belt and sword clearly visible. Orion is observable worldwide in the evening sky from January to March. It was named after Orion, a hunter in Greek mythology. The earliest depiction of the constellation of Orion is a prehistoric (Aurignacian) mammoth ivory carving found in a cave in the Ach valley in West Germany in 1979. Archaeologists have estimated it to have been fashioned approximately 32,000 to 38,000 years ago

The Pleiades star cluster (also known as the Seven Sisters or M45) is visible from virtually every place on Earth and is one of the nearest star clusters. It can be seen from as far north as the north pole, and farther south than the southernmost tip of South America. It looks like a tiny misty dipper of stars, shown here 3/4 of the way to the right and halfway up in the sky. In both myth and science, the Pleiades are considered sibling stars. The Pleiades stars were born from the same cloud of gas and dust about 100 million years ago. The cluster of several hundred stars is about 430 light-years distant, and the sibling stars drift through space together at about 25 miles per second. Many of these Pleiades stars shine hundreds of times mor 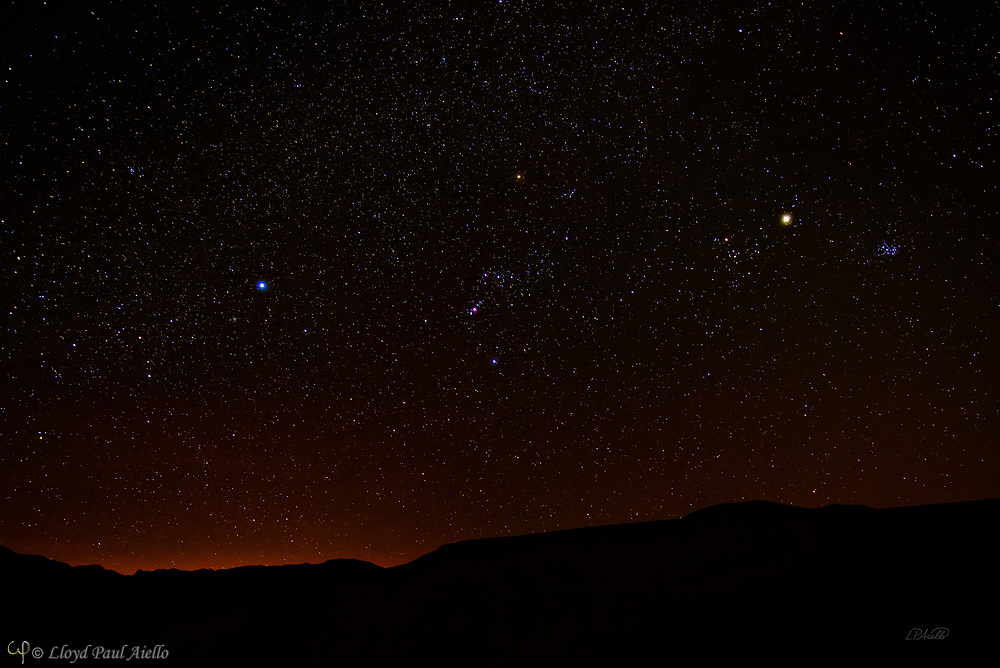