Predawn Path to the Perseids

The headlamps of four mountaineering groups are seen ascending Mount Bierstadt in the predawn light under a star-filled Colorado sky streaked by the annual Perseid meteor shower. Mount Bierstadt at 14,068 feet (4287 m) was first climbed in 1863 and is the 38th tallest peak in Colorado and the 44th tallest in the continental United States. Groups typically begin their ascent in the early morning so as to complete the 6.9 mile trail and be off the mountain before the danger of afternoon thunderstorms common in this area.

Best observed in the Northern Hemisphere and down to the mid-southern latitudes, the annual Perseid meteor shower occurs each summer when the earth passes through a stream of dust from comet Swift-Tuttle. Comet Swift-Tuttle is the largest object known to repeatedly pass by earth and has a nucleus 16 miles (26 kilometers) wide. It last passed by earth during its orbit around the sun in 1992 and will next do so in 2126.

This image is a composite of 10 photographs over a total of 171 seconds between 3:21am and 3:30am which captured a total of 34 meteors. 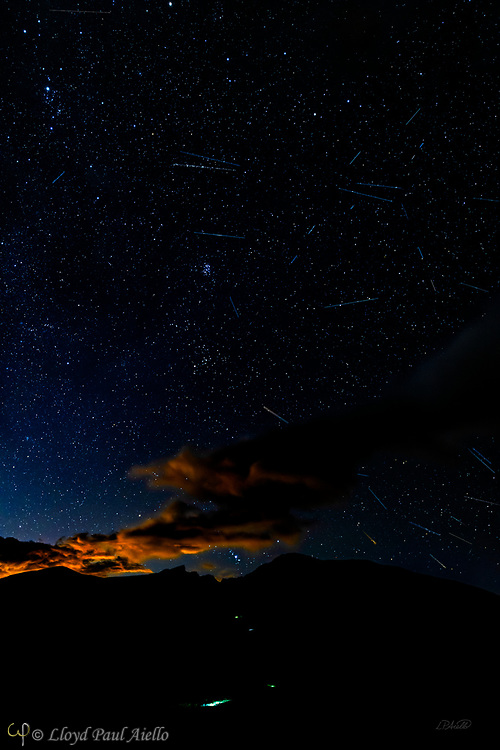